The Royal Canadian Mint has made their 2015 Canadian Flag 25 cent circulation coin pack available to the public at face value with free shipping for a pack of ten coins.

This year marks the 50th anniversary of the Canadian flag and the coin design features 50 children representing each year in addition to the future.  The quarter was designed by Bonnie Ross, an artist from Nova Scotia.

This offer may not last long!

To celebrate Sir John A. Macdonald’s 200th birthday the Royal Canadian Mint is striking a special commemorative toonie to be released on January 11, 2015.  Macdonald was Canada’s first Prime Minister. 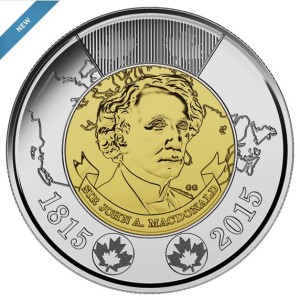 The coin’s reverse features Macdonald’s name and image imposed over a map of Canada with the initials of the artist, GG for Glen Green.  Green has also designed five of the 2010 Canadian Olympic 25 cent pieces.  The obverse features the familiar image of Queen Elizabeth II designed by Susanna Blunt.

A five pack is available at face value with free shipping from the Royal Canadian Mint for a limited time, but there is a limit of one pack per household which is different than the three packs they’ve allowed for other commemorative issues.

The Royal Canadian Mint has issued a commemorative five toonie pack based on the Wait for Me, Daddy historical photograph.  The photograph was taken October 1st, 1940 in New Westminster, BC by photographer Claude Dettloff, featuring a father heading off to war, leaving his family at home.

You can order your five-pack on the mint’s website while supplies last at face value with free shipping.  There is a limit of three packs per household.

The Royal Canadian Mint his holding a coin contest from August 1-17th, 2014. All you have to do is click the link and give them your email address and language preference. Whether you collect mint products or not, it’s an easy, free contest with a chance to win something for free – and that sounds like the right price to me!

Five coin packs of the 2014 Lucky Loonie are available at face value with free shipping on the Royal Canadian Mint’s website.

A loonie was first embedded in the ice in 2002 in Salt Lake City as good luck for the men’s and women’s ice hockey teams.  In 2004 the mint struck the first “lucky” loonie prior to the Olympics in Athens.